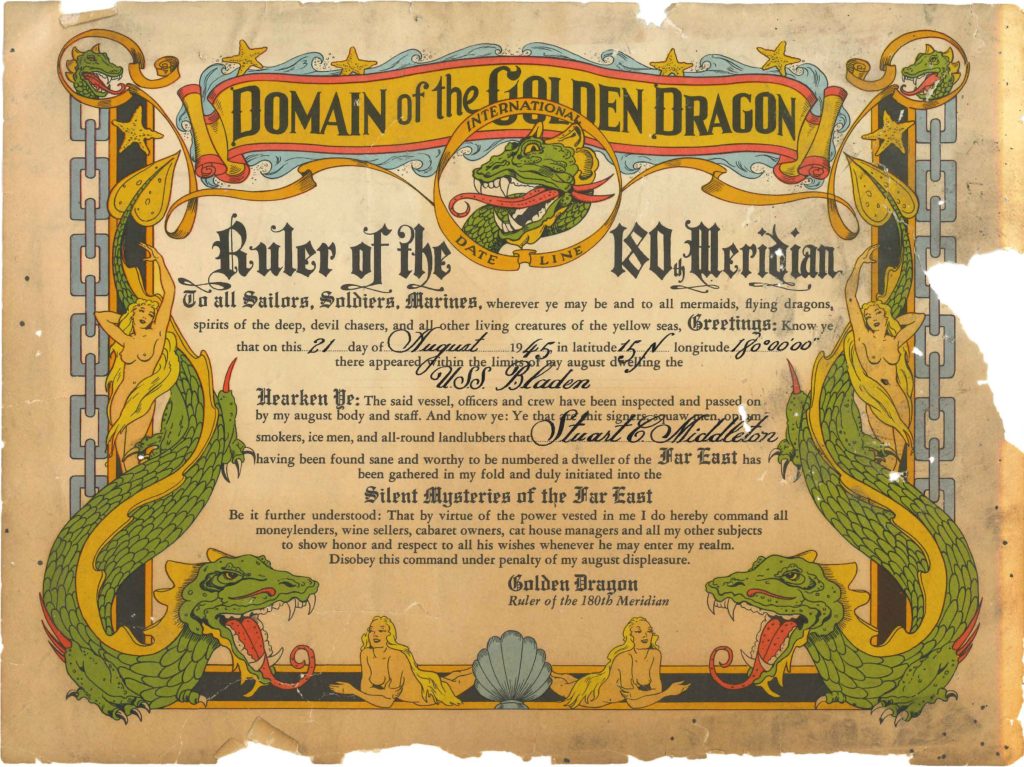 ‘Silent Mysteries of the Far East”…

Sailing long stretches at sea can only induce insomniatic hallucinations. The sea turns into a grand mysterious fantastic domain: Abandoned tall ships, heavy anchors, barnacled chains, wind spirits, and deep sea monsters. Mermaids are real, and the fair sex gets fairer through a haze of dreamlike recollections. This is the state of a nostalgic homesick seafarer with imagination running amok. Erotic images of women storm through the lonely sailor’s mind, who is desperately yearning to catch a glimpse, or to feel the touch of the beloved. Heroics are meaningless without sharing with the other sex. Glory, gold and silver might be the sought after treasure, yet woman is the ultimate prize. No adventure is complete without the feminine in it.

“To all sailors, Soldiers, Marines, wherever ye may be and to all mermaids, flying dragons, spirits of the deep, devil chasers, and all their living creatures of the yellow seas”

How not to be intrigued with this pronouncement.  Here we are, being instructed by the “Ruler of the 180th Meridian” that a certain Stuart T Middleton earned his spurs as a “sane and worthy” dweller of the Far East. Whatever that means, it is an initiation into a special rite.  The Golden Dragon has bestowed upon Stuart a very special privilege, with some very special protections.

“Be it further understood: That by virtue of the power vested in me I do hereby command all moneylenders, wine sellers, cabaret owners, cat house managers and all my other subjects to show honor and respect to all his wishes whenever he may enter my realm. Disobey this command under penalty of my august displeasure.”
Golden Dragon
Ruler of the 180th Meridian

There are many of these line crossing ceremonies  (a hedonistic  ceremony performed for “Pollywogs”–meaning sailors who have not crossed yet.)  The certificate above turned out to be one the rare ones, and crossing the 180th Meridian (International Date Line) is a special one that carries with it special status. This rite is as old as the early 1800s, and it is an initiation that used to be reserved only to military personnel while crossing these lines.

“Hearken ye: The said vessel, officers and crew have been inspected and passed on by my august body and staff. And know ye: that are chit signers, squaw men, opium smokers, ice men, and all-round landlubbers”

Certainly between all of the certificates for line-crossing this one takes the cake for the colorful language, and the well chosen art and titles. There is a lot left for the imagination, as the “Far East” is made to resemble an uncivilized domain of sorcery, dragons, magic, pirates and many more–pure enchantment . Also, what’s with the chains and bare chested buxom blonde pin up sirens adorning the cert? Are they supposed to be the Golden Dragon’s women in bondage? Abducted from civilization to far, far way savage lands?? Flanked by that menacing dragon, in a scene only fit for a classic sailor’s tattoo. Yes, I shouldn’t over think the imageries, yet, this should give us a small glimpse into the imagination of WWII young men, sailing for months on end without the sight of a female.

Finally, a few notes about the USS Bladen: the ship was commissioned in 1945 and served as a Gilliam Class Attack Transport.  It was assigned to the Asiatic-Pacific campaigns, where it served assault and occupation in both the Iwo Jima and the Okinawa Gunto operations.